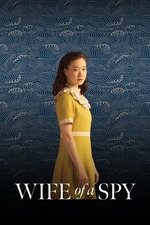 "He's a businessman, not an enemy."

Like all of Kiyoshi Kurosawa's best films, the transformations that this narrative undergoes operate as if the central character's perceptions of the conflicts around them have been extended into the form of the film itself. What struck me most immediately about this work was its interest in the conflict between cosmopolitan business interests—always seeking to supersede state boundaries and borders—and the interests of the nation-state, tied inextricably to a sense of irrationalism, which are signified through the two most important men in Satoko's life: respectively, her husband and Taiji, a local military leader and childhood friend. This film's architecture is thus constructed on the ground of that essentially modern conflict between capitalism's expansion and the nation's (nationalism's) demand for local cohesion and unity. But this isn't to say that the aforementioned conflict is represented here per se, rather it is the opposing moral frameworks that belong to each of them that Satoko is caught at the intersection of (the cosmopolitan emphasis on individualistic moral imperatives, and the communal ethic), and it is through her that we see this drama playing out and opening up into the moral dilemma that frames much of the remaining content. Wife of a Spy is a knotty work in its latter half because although it takes place within the context of this moral drama (the question of one's loyalty to the community or individual conscientiousness) it is ultimately not so much about the conflict itself, for this is something that supersedes Satoko and bears on her like we see in so many of those Japanese films from the period. Indeed, her husband's sense of "universal justice" outweighs his fidelity to his wife, and so, in a way quite similar to the great Mizoguchi, this film becomes concentrated on the sacrifices that Japanese women are expected to make, though they're often in vain or benefit only the men who appear to care so little for the women that they wouldn't survive without. All that's left is a representation of the betrayal; a nation burning for all the self-serving. A terribly sad film.