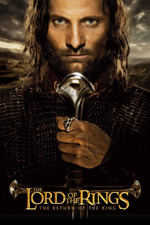 Oh my god. This was perfect. Pretty much perfect. Everything was absolutely spot on. I won’t go into what makes this so impactful, I’ll rather tell you all a story that demonstrates quite how emotional this ending is:

STORY TIME BITCHES:
So over the past week I’ve been watching these films with my dad and, most importantly for this story, my 9 year old sister, Isabelle. Isabelle has only ever cried from one film before, and that’s Cinema Paradiso. Outside of times where she gets scared or anything like that, she doesn’t get overwhelmed by emotion in films. Not Avengers: Endgame, not Up, nothing. But I am not exaggerating even one bit when I tell you that for the ENTIRETY of the last 30-35 minutes of this film, she did not stop crying. From the final confrontation until the credits, the tears didn’t stop streaming down her face. At first I thought she was only crying because of the scene with Frodo’s finger (which was the thing that set her off because she finds scenes of characters in peril very distressing) and about 5 minutes had passed and she was still crying. It was at this point that I realised that she’d moved past beings scared and that she was now being flushed with emotion. As each plot line is wrapped up in a nice little bow, it only got to her more. I’ve NEVER seen her do that before. And the thing is, she’s young. She doesn’t have the restraint or sensibilities of me or my dad who are older than her so can repress that emotion more so than someone who’s young and more susceptible to showing raw, genuine emotion. Isabelle’s reaction to the end is what I believe all who stuck with this story from beginning to end feel seeing all this unfold before their eyes. Celebrating the legacy of fallen heroes, saying goodbye to old and new friends alike, making way for new stories to reveal themselves, new adventures. It’s all so touching and so poignant and just… perfect. Isabelle’s unexpected yet completely welcome reaction paired with the film itself is a testament to the epic sense of scale that Peter Jackson has created with The Lord of the Rings. The ever expanding and mystical worlds and the characters who inhabit them. Watching this for the first time since I was about 8 or 9 years old, having now matured and grown to appreciate the intricacies of this vast universe was a treat and an experience that I will NEVER forget. And that… is cinema.