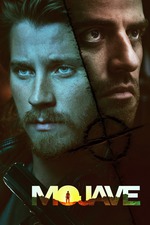 I'm gonna come out and say this now, William Monahan's MOJAVE is a twisted, odd, insane, neo-western thriller that will not be for everyone...and I am very serious. It's almost as of David Lynch went out and wrote a twisted psychological thriller, and turned around and left the project. So Nicholas Winding Refn comes around and does a re-write, he too then decides to leave the project. Then comes William Monahan, who takes the most insane parts of the two scripts and puts them together, While adding his own spin on the film. Now mind you, none of this is true...but it sounds crazy, right? That's because MOJAVE is one of the most crazy, insane, and twisted films I have seen in a long time. Is there gore? Not really. Is there heavy violence? Not really either. So, Armando what the hell are you talking about? MOJAVE finds two hardened men facing off one another, as Garrett Hedlund and Oscar Isaac are mesmerizing and evil here. This is a film where you don't know who to root for, who's the bad guy? That's a question the film poses, and Mr.Monahan's direction and writing does it so well! I can't say anything without spoiling much, but you will laugh, you will smile, you will get tensed...MOJAVE is the real deal, folks. If your a fan of films like FATAL ATTRACTION, BASIC INSTINCT, PLAY MISTY FOR ME, or THE GIFT...then this is a film you should seek it! MOJAVE will not be for everyone at all, but it's one you do not want to miss out on!