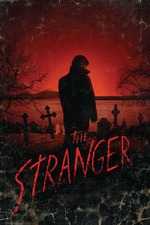 Guillermo Amoedo's THE STRANGER is a bloody, brutal horror extravaganza! One of my heroes, Eli Roth Produced/Presented THE STRANGER, but after witnessing this film I have quickly come to realize filmmaker, Guillermo Amoedo isn't going to need much help getting films made by using another filmmaker's name, as Mr. Amoedo is insanely talented and after viewing THE STRANGER...he's going to be a household name in a few years. THE STRANGER is a horror/mystery/drama about an unknown stranger, who comes into a small town in hopes of finding his long lost love, he comes to find out she has died, as things then spiral out of control for the town, the stranger, and the people that come across him. Why? The stranger is a vampire, who's trying to rid of what he calls "A disease" but things spiral out of control...and I mean THE STRANGER gets insane and amazing! Guillermo Amoedo directs/writes a very dark and very haunting film that turns the Vampire genre upside it's head...big time. I always believed being a vampire would be fun, but after viewing this film...it truly scares me now. I highly recommend THE STRANGER. I will Definetly be keeping a close eye out for Mr. Amoedo, a very gifted filmmaker, who Mr. Roth discovered.