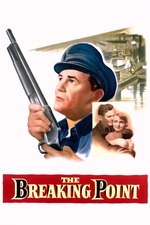 Moments I Enjoyed in 1950's The Breaking Point

- When Patricia Neal just grabs a cigarette out of John Garfields' pocket without asking.
- Phillis Thaxter slapping John Garfield for saying Patricia Neal might have nice legs.
- Patricial Neal just easing into the bench seat at the yacht club, both arms up on the backrest. So fucking cool.
- John Garfields' line delivery of "For all I know she's covered in moles."
- Juano Hernández's son at the end, left alone, the crowd dispersing without him. The movie doesn't forget that he has a son, even though it's a very small part.
- Michael Curtiz' directing style, who is so good I often forget he exists and the movie simply wills itself into being.
- Patricia Neal's delivery of "Speaking of coincidences, I live in Number Seven. My friends just kick the door open."
- Sherry Jackson and Donna Jo Boyce as Garfields' daughters. They bring so much life and chaos to the domestic scenes. And that delivery of "it'll grow out" about their mother's dye job. Why you gotta hit her so hard?
- Me yelling at John Garfield to just go pick lettuce in Salinas, already. Everyone would be much happier!