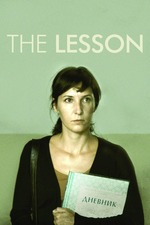 I like to compare films I'm watching with films I've watched previously, and The Lesson didn't escape that fate. It's a Bulgarian social realist film set in the current economic climate in Europe, and it's similar to the Dardenne brothers' Two Days, One Night starring Marion Cotillard. Unfortunately it's not quite that good, although Margita Gosheva is very good in the leading role as an honest teacher, when financial ruin starts threatening her stable family life.

When it comes to the plot, it could definitely do with more restraint. Two Days, One Night did this beautifully, and never did I question what happened in that film. In The Lesson, there are too many coincidences and Murphy's law should have been toned down a bit. We know that she's having a shitty day, and that her situation is incredibly hard, but did the car really have to break down as well?

But to be fair, it is a good film, and the performances are solid from pretty much everyone involved. It's a relevant theme, and I'm glad films are being made to showcase the hardships of common people who are just trying to keep their family afloat. The Lesson fits that bill nicely.