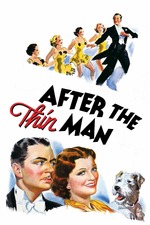 The tone is a little darker than the first one — closer to the feel of Hammett's original novel, in fact, which I reread just now as well.

And, as in the novel, Nick is more central to the plot, and Nora has receded a little.

So: Not quite as sparkling on the second go-round, but the mystery is solid. And of course there's the climactic scene, where James Stewart's lovelorn sappiness burns away and he becomes a raving, hateful murderer — similar energy to his "scurvy little spider" speech to Mr. Potter 10 years later.

Van Dyke's direction suits the mystery plot fairly well — I love the sequence when Nick is investigating the anonymous apartment, ending with Dancer figuring out someone's upstairs and the two of them winding up in a gunfight in the basement.

That said, the Asta subplot is godawful, something on par with warmed-over Little Rascals shenanigans — and that's before I realized the racist overtones to it.

Powell and Loy have great chemistry, I'll probably check out at least the next in the series, but boy do I have no interest in the Charleses as parents.