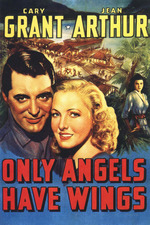 Hadn't seen this for a couple of decades — it was even a surprise to me when Rita Hayworth turned up.

It's a perfect Hollywood movie, in the company of Casablanca or Out of Sight — every bit of craft performed flawlessly and integrated seamlessly, from the script to Hawks' direction to the look of Richard Barthelmess's eyes when he first appears.

What stuck out to me this viewing: It's a love story about men who love something that will hurt and might kill them. So it's no wonder that Geoff ends up not just falling for but committing to Bonnie, a woman who manages to injure him several times during the course of their relationship. He's prepared for heartbreak, but can he really resist someone who scalds his hands and ultimately shoots him in the shoulder? Clearly not.

Deftest bit of business is of course the two-headed coin, which never calls attention to itself until it means something very specific — and in the end its key role in the plot arises naturally and as a surprise. The pen in Say Anything or the key in The Apartment only wish they were as deft as that coin.

Now I'd just like someone to create some Barranca Airlines T-shirts and I'll be happy.