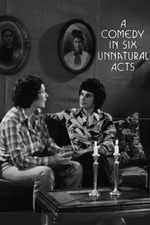 A Comedy in Six Unnatural Acts

A Comedy in Six Unnatural Acts 1975

Satirizes a number of lesbian stereotypes -- the butch, the predator, the wallflower -- in a playfully irreverent way that reminds me a lot of the work of other Bay Area queer filmmakers like Barbara Hammer, Arthur Bressan, Curt McDowell, and Michael Wallin. Much like McDowell's Nudes: A Sketchbook, all six of Oxenberg's vignettes could stand as their own discrete shorts -- each constructed around different types of gags and styles. Very cute.