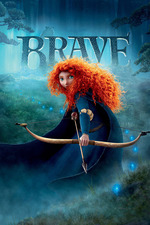 Now I must admit that this film completely took me off guard. I knew little of it but from the cover of the bluray I had and only from a very few clips I had seen I thought I was going to be in for a Mulan type experience, sort of like an animated Braveheart! – but that couldn`t have been further from the truth – I was completely surprised this film had anything magic related – not that I’m complaining – it just threw me a bit – but then that’s my own fault for assuming things!

The movie is actually a story about self discovery, about the bond between mother and daughter and the way this can be so frought at times – I am sure that the film personifies the way that most of us have felt about our parents at times! But ultimately it is about coming together as a family against our differences, fears and prejudices (in the case of Bears!) and having the power to see how the actions of the past can shape the future.

The movie was itself absolutely breathtaking – the animation used was simply exquisitely detailed and complemented the beautiful story telling that unfolded on screen.

What I would say is that I found the style of storytelling here very heartfelt and a little raw at times and although, yes, there is some comedy this is not what this film is about and in this respect has a very different feel to most other Pixar’s I have seen taking a very emotional approach throughout – with the comedy being a lot more understated and some times a bit dark.

So yeah, overall, a spectacular entry from Pixar with some stunning cinematography and a beautiful heartwarming story.

With a strong female lead character this is simply a treat to watch – whilst perhaps focused more as a drama with some mature themes than leaning to Pixar’s usual light comedy storytelling.

Get the ones you love together, snuggle up add some treats and simply enjoy!!