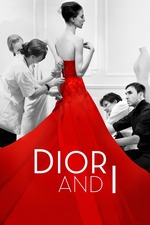 While most of the film's narrative centers around the pressure - internal and external - imposed on Raf Simons for his first couture show as newly minted creative director at Dior, the documentary unspools a number of different threads that all reach satisfying ends.

As the primary subject of the doc, Raf's character is examined and portrayed as that of ambitious introverted creative type. He is contrasted with that of Christian Dior himself with old footage and readings from Dior's own writings. For a film set entirely in the present, it gives scope and history to brand, and really sets Raf's work within that timeline.

The movie is never truly his, though. The movie is about the teamwork, camaraderie, and passion that goes into the clothing that makes up the brand and - in some ways - that makes up the entire fashion industry. It is full of affection towards the people who make up the atelier - the workers who make the actual clothing.

That term isn't quite right, of course. Pieter (Raf's primary assistant) calls the premieres/head supervisors "businesswomen" because of their ability to manage the huge number of people and garments under their control. But Dior and I makes one final argument here: the people that make the clothing, as much as Raf Simons, are artists. That fashion is art.

It's a hard argument to dismiss when the clothes hit the runway and everyone involved looks on, holding back tears and pride and the impossible inhuman beauty created from simple human hands.