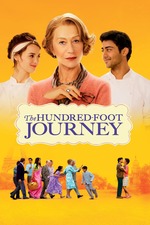 Truly, it is possible to roll one’s eyes at a story’s silly manipulations and still find it hard not to respond to those same silly manipulations. Adapting Richard Morais’s 2010 novel, it tells of an Indian immigrant family looking to start over in a small French village, where they open a restaurant across the street from the country inn run by Madame Mallory (Helen Mirren). But while Mallory begins feuding with Papa Kadam (Om Puri), she also recognizes the incipient culinary genius of his son, Hassan (Manish Dayal). Director Lasse Hallström is a veteran of film romance through food porn (Chocolat) and cultural cross-pollination (Salmon Fishing in the Yemen), and he lays on plenty of his twinkly tricks through a plot that gets overly dense as both Hassan’s celebrity and the various relationship permutations grow. But there are also simple crowd-pleasing moments that showcase the veteran talents of Puri and Mirren, liberally seasoned with plenty of mouth-watering scenes of chefs at work. Yes, everyone learns important lessons—including viewers who can appreciate that a movie cheesier than French cuisine can still be somewhat tasty.