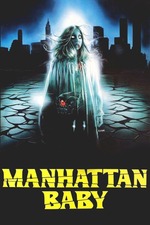 Here's another poorly-regarded Lucio Fulci flick that totally bored me upon first viewing. Granted, that was decades ago, on a pan and scan VHS, clearly the wrong way to see anything Lucio directed despite being my only option at the time. This is the fuzzy tale of an archaeologist (Christopher Connelly) who discovers an Eye of Horus on the wall of an Egyptian tomb that shoots blue lasers into his eyeballs, temporarily blinding him. Concurrently, across town, his young daughter Susie (Brigitta Boccoli) receives an amulet of the same symbol from a spooky old lady. Once the family is back home in Manhattan, things get progressively weirder, with Susie and her brother's (Giovanni Frezza of The House by the Cemetery fame) bedroom closet becoming a glowing portal to Egypt, the sudden disappearance of their au pair (Cinzia de Ponti) - named Jamie Lee, har har - and a number of dad's and mom's (Laura Lenzi) colleagues put in mortal danger by phantom cobras, scorpions and the like. The local antiques dealer (Murder-Rock's Cosimo Cinieri) recognizes a possession when he sees one, and, luckily for Susie, he dabbles in exorcism.

With a dumb title, diminished onscreen violence and recognizable chunks of Fabio Frizzi's score lifted wholesale from City of the Living Dead and The Beyond, it's easy to pinpoint Manhattan Baby as the beginning of Fulci's decline as a horror maestro. Putting its deficiencies aside, though, it's not such a bad time. First and foremost, it's gorgeous, Guglielmo Mancori's photography always evoking that misty, dreamlike vibe fans crave from vintage Italian horror and from Lucio Fulci in particular, with all the gleaming surfaces and dramatic zooms you could ask for. This movie may mark the epitome of the director's obsession with eyeball close-ups, and it's not completely gore-free, thanks to the goofy taxidermy bird attack. The story is a confounding, nonsensically arranged sequence of events, but I'd expect nothing else from the screenwriting team of Elisa Briganti and Dardano Sacchetti (Zombi 2, 1990: The Bronx Warriors). The much-emphasized resemblance of certain scenes to those in The Exorcist and Poltergeist is not really detrimental, as those are fairly minor gadgets in Baby's nutty faux-Egyptian arsenal. And who doesn't love that atrociously dubbed brat Giovanni Frezza? Much like I recently discovered with The Black Cat, this is not top-tier Fulci, but it's also not nearly as shoddy as its reputation (and my hazy memory) suggests.