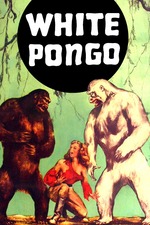 After I saw Bela Lugosi Meets a Brooklyn Gorilla a few months ago, I thought it might be fun to check out more old public domain ape suit movies. Thanks to a cost-efficient Oldies.com box set I recently acquired, I can follow through in earnest, even if my first selection was not encouraging. The bulk of this PRC stinker's 70 minutes are devoted to a bunch of white yahoos searching the Congo for a white-furred gorilla who some old scientist believes is the missing link. Their native guide is for real named Mumbo Jumbo. The gorilla (stuntman, B-western star and premier ape actor of his day Ray "Crash" Corrigan) mainly watches these dullards squabble from behind plastic leaves. The leader of the expedition (Gordon Richards) must contend with greedy mutineers while his daughter (Maris Wrixon) aggressively tries to shake dad's creepy minion (Michael Dyne) and get with a hunky gunman (Richard Fraser).

I was ready for White Pongo to tear the faces off all these fools, but the most he ever does is get in a stick fight with another ape and carry off Wrixon because that's what ape suit movie apes do. Considering that this trope was a thinly-veiled appeal to the fear of miscegenation, is it supposed to be less racist that the brute African overpowering the female lead here is white? As Mumbo Jumbo could tell you, this movie is no paragon of cultural sensitivity, but its greatest offense is in being so damn boring whenever there's not a crappy ape suit on screen. Then again, you might love scratchy ancient stock footage of jungle animals or scenes of people sitting in/getting out of boats, in which case White Pongo will meet your needs. If only the obnoxious fake Australian guy got "eaten" by a "lion" or something, there would be something to latch on to. At least there are multiple monkey costumes, and White Pongo and his foe have articulated jaws that make their permanently concerned faces that much more delightfully fake. The rest is a miserable chore.