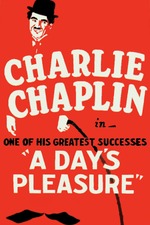 Catching Up with The Tramp Mini Project

Ha ha the joke is that there's not very much pleasure at all ha ha please Mr. Chaplin I'm just trying to survive quarantine

The opening gag with the car is very effective and reminiscent of Chaplin's later prop work, and it's fun to watch him experiment with formal/structural comedy, e.g. using the limits of the camera frame for humor (throwing stuff out of frame is one of the most consistently funny jokes).

Peter Labuza has (inevitably) already made the most relevant point about this short: Chaplin was still developing his Tramp persona, and here he oscillates between being rude and doing violence to other people and having rudeness and violence done to him—essentially switching back and forth between sadism and masochism.

Ultimately it's the self-effacing humor that would prevail over his more mean-spirited antics—it's not only funnier but more empathetic to wring humor from misfortune rather than violence—but it's still fun to watch him document the process of figuring that out.