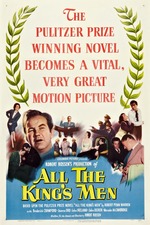 All the King's Men

[insert "why not both" gif]

The political sphere as the realm of film noir's existential fatalism.

Small-town self-described "hick" Willie Stark (no relation to Tony) is elected governor in a surprising upset, but his rural values gradually become corrupted by his existence in politics. Meanwhile, a trust-fund-baby journalist Jack Burden (who is ironically very rarely a Burden to anyone) reports on Stark's ascension and becomes increasingly involved with his campaign.

I don't really have a singular, unifying interpretation of this one, but I liked it a lot—it's so dense and thorough and true to life that it feels like historical fiction, and the structural similarities to Citizen Kane are more than simply superficial—so I guess here are a bunch of the things I liked about it in no particular order except the order they come out of my stupid little brain:

The central narrative arc is some classic American bootstrapping (Stark is the archetypal self-made man), which I was initially turned off by because bootstrapping is a naive ideology that ignores socio-economic factors like race and class, but the movie itself eventually becomes critical of it as well, showing how Stark's success was fundamentally unstable/unsustainable.

There's obviously a lot of sub-text and just plain-old text-text about class here that I really loved. Burden regularly takes vacations to return to his family, and they live in a kind of oasis of wealth separate from the rest of the world. Burden's step-father thinks he can buy anything with money, from objects to people to his own version of the truth. On the other hand, Stark begins the story in a poor, rural community rank with corruption, with the (relatively) rich buying their way into and out of everything—something which Stark initially establishes the very base of his political position against, but which he ultimately comes to embody himself once he has a taste of the power of politics.

I love that Burden's newspaper initially covers Stark when he's a lovable underdog, but they stop covering him and support the opposition once he shows a significant level of success. This is how ideology functions: the central power structure can support radical ideas like healthcare for all and free education (that's not a Bernie joke, those are literally Stark's political positions), but only as ideas, not as real possibilities; once they begin to threaten the status quo, they must be eliminated.

Stark's fall is eerily reminiscent of Donald Trump's presidential campaign, where he ran on promises to "drain the swamp," but it immediately became clear once he was elected that he was "the swamp," and that if anything he would expand it, not drain it. Likewise, Stark runs on an anti-corruption campaign, but wins it by taking money from the very same people his opponents took money from and using that money to buy his version of the truth (and this similarity becomes even more creepy when Stark's supporters show up at rallies with torches). He becomes the thing he most hated.

But the central question of the film (and one that it leaves maddeningly unanswered) is what motivates this change in his character? What causes him to swing from pure innocence to villainous dishonesty? The lack of an answer and the repetition of the idea that <I<"politics is a dirty game" builds on the theme that it is politics itself that's incurably corrupted. And this is where the film's location within the genre of film noir becomes significant: where other noirs locate the general sense of existential fatalism on the streets and in the back alleys of the Great American City, All the King's Men locates it within the sphere of politics itself.

The one element I found curiously absent was the question of whether this corruption affected Stark's politics. His supporters still seem to love him even to the end of the film, so it seems most likely that his lower-class sensibilities remain in tact in that realm at least, which leads to another interesting potential reading of the film: what if this degradation of his relationship with his family and friends is the necessary and inevitable result of a life in politics? What if this corruption is unavoidable, and Willie Stark was one of the greats because he at least isolated it in his personal life and remained true to himself politically?

Blood on the Sun