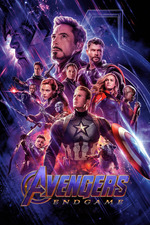 Okay yes I still don't really like it, but here's the thing: I do really like the first ~45 minutes, and I really like the funeral and the end. The first act is great at articulating the pain of loss and trauma and how different people deal with it in different ways—Cap starts a support group, and Hulk finds himself, and Nat throws herself into her work—and these are all valid expressions of and reactions to despair. The first act is also great at articulating the immutability of power: Thor kills Thanos and nothing changes. Evil still exists in the world; Shield still protects those it can and Captain Marvel protects those it can't, but killing Thanos did not rid the universe of evil.

Then I think the movie kinda goes to shit and undoes all this thematic and emotional groundwork, and you can read more about that in my previous review, but I do actually like the funeral at the end. Not as a funeral specifically for Tony Stark, mind you; I like it as a moment of mourning where these people come together to grieve. This is the proper ending to a story that begins with trauma. So here's my proposed recut of the movie: remove the time heist. The Avengers assemble to talk about their pain, and then they mourn, and then they move on. That would be a powerful movie.