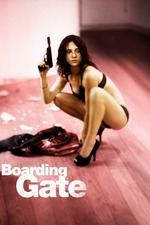 "Well, you were very good at what you do. And you got paid… quite well as I remember."
"Yeah, 'cause it turned you on to pay me for that."

Boarding Gate is all about the network of power formed at the intersection of sex and money as methodologies of control. Sandra (Asia Argento) and Miles (Michael Madsen) used to be together, and Miles used to pay Sandra to sleep with his business contacts in order to extract useful information from them. The lines of power here are at least relatively clear — Miles used money to pay for sex, Sandra used sex to "pay" for power (albeit surreptitiously), and then Sandra used this power to "pay" for money — but this apparent clarity is quickly obscured by questions of consent and sexual pleasure.

Sandra points to the fact that Miles is turned on by paying her to have sex with others in order to show how he's being "paid" twice in this equation: once in the power of information and once in the vicarious sexual pleasure of masturbatory voyeurism. Sandra, on the other hand, seems to be paying twice: once with sex to buy power, and then again with that power to "buy" the money Miles paid her in the first place. Miles attempts to excuse this blatant exploitation by saying that Sandra "got off on every bit of that just as much as [he] did," to say essentially that she got paid a second time with the sex she used to pay for the insider information she used to pay for the money she took to have that sex in the first place.

This covert and convoluted victimization wasn't an isolated incident, and it isn't safely isolated to Miles's and Sandra's past. This covert and convoluted victimization is written into the very fabric of their relationship and of the film's sexual politics more generally. Sandra ends up back at Miles's place, and we see how little has changed between them. Sandra might know that Miles is using her, but that knowledge has no power over the effectiveness of his control over her. His manipulation still works even when his victim knows that it's happening. This is how capitalism complicates sexual relationships and how men take advantage of that complication to hide their exploitation. Money and sex become power and control.

So Sandra tries to take back her life, she attempts to wrest power from the clutches of the men who possess it and reassert control over herself and her existence within this abusive capitalist patriarchy, but of course it's never that simple. She escapes Miles and flees Paris for Hong Kong, but while she's geographically free from his grasp, she hasn't really gained any autonomy. "Now you're free!" explains Sue (Kelly Lin), but Sandra knows better. "I'm not free of anything. I destroyed my life." "You have money," Sue placates, but what good is money when it's never enough to buy power away from the men who control the world?

"Fuck the money. You can keep it."

ps. thanks to gentry for encouraging me to watch this one. I may not have loved it as you do, my friend, but I’m definitely glad I watched it nonetheless