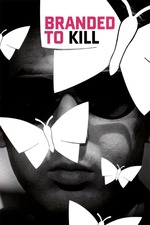 Absurdist art is always a difficult proposition for me. My whole shtick is making sense of stuff, putting my themes and my symbols and my metaphors all in a nice, neat little row, but part of the point of absurdism lies in the way that things don't make sense, the way that things don't precisely line up. But in a different way, this is also just another kind of sense, albeit one that's often more challenging for me. There is meaning in the meaninglessness, in the chaos, in the anarchy, in the absurdity. It is the absurdity of a life lived alongside death.

Goro Hanada is the third-ranked hitman in Japan's criminal underworld. Death is his profession, it is his livelihood, it is how he makes a living. He is a human contradiction, the duality of life and death incarnate. And while this existence involves a close proximity with death, not only for his prey but for himself, it also involves a close proximity with love and with sex, the source of life, the yin to death's yang. Hanada's wife Mami is more often nude than clothed, and the two seem to be constantly fornicating. The only thing that stops Hanada from having sex is his desire to sniff rice.

That's right: Hanada has a bit of a rice fetish. Inhaling the aroma of a freshly cooked pot of rice seems to literally, within the context of the story, not reading into subtext but blatantly right on the surface of the text, get Hanada's dick hard. And so immediately my brain starts wondering what the rice signifies. Is it aligning Hanada with the lower class, with the poor who can only afford rice for their meals? Is it representative of his enjoyment in the simple pleasures in life, a reminder to take a break from the high-stakes life and death struggles of a professional assassin and enjoy a simple pot of rice?

I mean, maybe, but more to the point I think it's a mark of the absurdity of his being. He is an absurd man living an absurd life in an absurd world, so it's only natural that he finds pleasure in absurd places. And one of the absurd places he finds pleasure is with Misako, the mysterious woman who hires him to do an impossible job to pull off an impossible hit. Misako has a strange pastime of her own: she collects butterflies. She decorates her entire apartment with them, floor to ceiling — perhaps not as absurd as Hanada's rice fetish, but at least as idiosyncratic.

But what's most absurdly beautiful or beautifully absurd about Hanada and Misako's relationship is the way they reflect each other, the way they play opposite orientations of the same duality. Misako is defined by her deathwish and her unattainability — one of her first lines is "My dream is to die," and despite Handa's attempts both to kill her and to seduce her, both of their desires remain unfulfilled. If Hanada is life and death embodied in one human being, then Misako is not-life and not-death. She wants to not-live and not-fuck.

So, naturally, Misako sends Hanada running in circles around her thematic negation of his existence. Their relationship becomes a morbid farce, the killer unable to kill the woman who wants to but cannot be killed, the perverted sex fiend unable to screw to the who wants to but cannot be screwed. They should be perfect for each other, but nevertheless… And my temptation here is to read this relationship in terms of its representation of Lacanian death drive, Misako the impossible objet petit a that Hanada finds himself endlessly encircling with no hope satisfaction beyond death, but again I think this would be missing the point, this would be trying to look for reason when the purpose is the un-reason.

Because it's after this fateful encounter between Hanada and Misako that the most striking scene occurs (a scene so striking that Criterion used it for their box art). Hanada leaves Misako's apartment and wanders the streets of Japan, aimless, unable to reconcile Misako's existence and her negation of his own existence, but at the same time he can't escape her, and her butterflies flutter their way into the visual frame, forcefully occupying his existence within the film's diegesis. Two impossibilities, two people defined by their existential contradictions, colliding in a burst of beautiful absurdity.

Unable to reconcile the absurdity of existence, his, hers, or all of it together, Hanada pursues a different kind of self-reflection: his double, the first-ranked hitman in Japan's criminal underworld. And, of course, these two hitmen end up not only trying to kill each other, they end up in bed together — not literally having sex, although with all the rice stuff I'm honestly surprised Seijun Suzuki didn't just go for it. After confronting his opposite (misako), he confronts himself, he confronts the absurdity of trying to live a life at its impossible intersection with death.

And while Hanada and Misako and the unnamed Number One hitman are symbolic exaggerations, is this not a heightened version of a more mundane existential conflict that we all live through? We may not be professional assassins, but we all live lives defined by death, defined by the inevitable ultimate end point of all life, and there's something absurd about that, something as absurd as sniffing rice or collecting butterflies. We may not all be Branded to Kill, but in a different sense we are all branded to die. We all exist in the shadow of death, haunted by its specter.