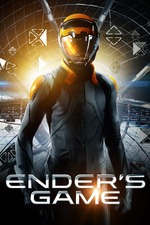 As with many movies like this, it is first important to clarify that I was indeed a fan of the book and am grateful to have this visualization of the source material. From the time it was announced through its release I was incredibly excited (I also wrote way too much about it), and to some extent I wasn't even let down by the mediocrity that resulted. That said, I think it serves a slightly limited purpose beyond that of simply portraying visually a variety of scenes from the book.

There are three critical areas in which this movie fails to a greater or lesser extent.

Dialogue. Between the stiff acting and the screenwriter picking lines at random from the book without backing them up, it's hard to blame any one source for the failure of the dialogue. Some of it feels like there's just too much respect for the original, like a greenhorn actor trying to read Shakespeare. Some of it feels like the actors are just too young to have the necessary experience or too old to have the necessary enthusiasm. In any case, an unfortunately large portion of the dialogue limps under an unseen dead weight.

Tension. This one's tricky since I think there is tension in the movie, just from the wrong source. Ender clashes often with his fellow schoolmates, but rarely and never with enough impact do we get a glimpse into the struggle between Ender and the Battle School itself. As any good fan of Kubrick's The Shining should know, there's absolutely nothing wrong with an adaptation not following its source material. The problem is that the tension between Ender and his peers isn't what the story's about. In the final act, the film attempts to resolve the tension between Ender and the Battle School instructors, but that's a hard thing to do when that tension never existed in the first place. I think the tension that does exist is well executed especially in the scenes with Bonzo, but simply having Ender say he's not sure the teachers aren't the real enemy doesn't work. Show, don't tell.

Character. We don't get even close to enough of Ender's emotions to make him sympathetic. We need his regret and remorse, we need to see his progression from insecure to confident, and perhaps most severely lacking we need to see his suffering. When all we get is Ender's success he becomes an asshole for taking out his frustrations on those around him. His success doesn't carry any weight when we can't see his failures.

With that said, I think there are a few areas where this movie does enjoy some mild success.

Bonzo. I don't know where they found the guy that played him, but he was fantastic. His first scene with Ender still really works for me, where you see that he's dramatically shorter and clearly suffering from some inferiority complex and pulls Ender physically down to his level. This also is successfully payed off through their following conflicts and confrontations. I won't spoil anything for those who haven't seen it yet, but needless to say their relationship is at the center of the film for me. As I mentioned above I think this also shows how the movie doesn't really have its head on straight, but you can't fault it for succeeding even if it's in the wrong area.

Themes. There's a chance I'm filling in the gaps from my reading of the novel, but I think the movie hints at some solid ideas about militarism, xenophobia, and ideology. I don't think it really develops any of them very well and spends the majority of its efforts on action, but it's certainly much more than a lot of the shamelessly jingoist cinema coming out of Hollywood.

Visuals. I certainly wouldn't call Ender's Game artistic, but it's pleasing to my eye as someone unabashedly in love with anything involving spaceships, lasers, or aliens (and this has all three!). Sure, it's all a green- or blue-screened hodgepodge of digital nonsense, and I'll agree some of it looks rather messy, but to me a lot of it does look rather nice (see in particular Ender's first battle with Petra).

Overall, I think Ender's Game is a deeply flawed adaptation and an even more deeply flawed film, but for anyone dying to see the book on screen it could have been much worse.

I'd also just like to quickly express my gratitude for including the fantasy game. So, yeah. Thanks for that.