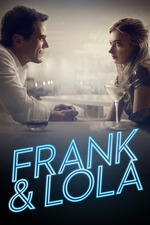 Sexy, luscious, vibrant, dark, tense; Frank & Lola is a classically melodramatic noir thriller about a chef who gets involved with a woman who turns his life upside down.

Maybe it's the excitement of seeing this in the busy festival atmosphere, or maybe it's my love of film noir and how well this fits that mold (and it really does; all the complaints I've read about it are things I understand because "that's film noir"—I'm still kicking myself for chickening out and not asking Matthew M. Ross about his noir influences), but I really loved this. It's not something that will change the way you look at the world or anything transcendent like that, and I can see myself looking back at this in a year or so and possibly wondering what I was thinking, but even writing this over 24 hours after watching it I'm still high on how much fun it was.

It's all about how complicated questions of agency and trauma are and how ambiguous and indecisive (or undecidable) our ideas about identity and meaning are. Imogen Poots' femme fatale is at the heart of the film, and all of the drama revolves around the question of her complicity in actions I won't ruin for folks who haven't seen this yet. Michael Shannon goes back and forth between believing her, hating her, loving her; but he's always a step behind. Poots is the bearer of truth, but she doesn't have access to it; she's always kept at a distance from her own desire. All of this comes together to create a profound sense of unease about the fundamental instability of the world.

"We're both rotten."
"Only you're a little more rotten."

On top of this, the film is simply gorgeous. It was shot by relative newcomer Eric Koretz (only his third feature film, and the first of this size), and he uses the neon lights of the city to eclipse the actors and reflect the characters' psychological deadlocks and emotional distance from themselves in the way the city looms over them and casts them in pitch-black silhouettes. Michael Shannon plays strong and somewhat imposing on the surface but fragile and insecure underneath (boy howdy I need to see more of his work) and Imogen Poots plays fractured and unstable without becoming either powerless or diminutive (If anything, Shannon is more helpless by the end than she is).

I can't imagine this being a big favorite out of Sundance since it's certainly heightened in both its style and characters, and it uses issues of sexual assault in a way that may make some viewers uncomfortable (for me it's an inseparable part of her identity and the film's questions about agency and even about the nature of film noir as a genre, but it's certainly not a simple subject), but it really worked for me. It's probably closer to something like Green Room in that I enjoyed it a lot on a personal level but would have trouble recommending to a broad audience, but if what I've described here sounds like it's up your alley then definitely keep your eyes open for Frank & Lola.