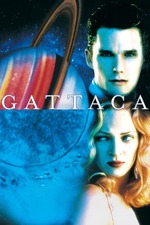 I love Gattaca more each time I see it. This is my third time through it and this time I realized it basically has the same strengths and weaknesses as Blade Runner, another sci-fi favorite of mine. The acting is wooden and the pacing is slow enough to put an insomniac to sleep. This was Andrew Niccol's first time directing, and while he still hasn't done much to prove himself as a director (In Time, The Host...) I think some of Gattaca's failures can be chalked up to inexperience. Personally I just don't care about them.

I'll be damned if this isn't high concept science fiction at its best. Every detail of the story is designed specifically the test the limits of the conflict between nature vs. nurture, faith vs. science, destiny vs. free will. Even with a small thing like the 12-fingered pianist, Vincent and Irene leave the concert discussing these issues: "Twelve fingers or one, it's how you play." "That piece can only be played with twelve." And through all of it the film never takes a side one way or the other, even down to the ambiguity of the ending. Add to this the incredible cinematography—from lighting to color to the upside-down sex scene—and the melancholic orchestral soundtrack, and you have what for me is a masterpiece in spite of its flaws.