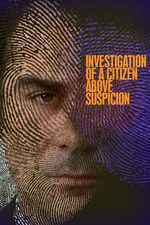 The impotence of state power.

Investigation of a Citizen Above Suspicion is a title with a double meaning: it is about a high-ranking police chief who commits a murder, and the “investigation” is both of him to see if he did it and by him (of the department) to see if it’s even possible for him to be caught. As the head of homicide, he is a man of such authority and prestige that it begins to seem as though he might be immune to the law.

On the surface it’s a compelling murder mystery with hints of giallo (sexualized violence): there’s an effective tension in the question of how the (dual) investigation(s) will turn out, the editing elides segments of time in a way which is both unsettling and propulsive, the camera uses a creative mix of traditional techniques (extreme close ups) and innovative ones (an establishing shot turns into POV), etc. But what’s under the surface is even more interesting.

The film essentially operates on three levels: the investigation into the murder of this woman, flashbacks of the police chief’s relationship with her, and the police station’s general struggle with subversive elements (protests, graffiti, etc.). While the first two levels provide the central arc of the narrative, this final level is the one that gives it its depth and flavor. It’s the background substance that doesn’t answer the question of the plot but changes the context in which we receive that answer.

As a story about a respected law enforcement officer who falls from grace which is also at the same time a story of that officer’s investigation into the law enforcement he represents (the question whether a figure such as himself is truly “above suspicion”), the film is at its core an inquiry into the nature of state power, and this background substance further develops this thematic kernel. We see the violence of the police interrogations and the oppression felt by the populace and begin to understand why the chief’s investigation might be necessary (and why it has to end the way it does).