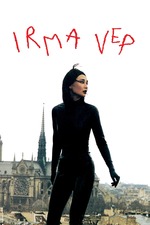 "I didn't understand him because he was a mere technician."

There's a lot of talk of language barriers here, both explicitly in the dialogue and implicitly through the language of cinema, and that became something of a metaphor for the entire film for me.

Maggie Cheung travels to France for a role in a movie, and she only speaks English, while the French people around her speak some slightly broken English to her and speak French among themselves. René Vidal, the director of the film she traveled to France to star in, attempts to communicate in English, but often finds himself frustrated: "You understand what I say?" he asks her, later complaining to one of his assistants that "I'm not sure she understands everything I say." On the other hand, Maggie is often left out of conversations entirely, with many of the people around her speaking French and only occasionally translating any of what they say for her.

But this isn't the only kind of miscommunication going on behind the scenes. There's a more general disconnect between René's vision of his film and the perspective of his cast and crew: what René takes very seriously, others laugh at. Several of the crew members confide to Maggie that they don't have much faith in René. In short, René and the people making his movie don't see eye to eye; there's a broad misunderstanding in terms of what they're doing and why they're doing it — almost as if they're speaking different languages, even when they're all speaking French. Ironically, however, it's Maggie that seems to understand René's vision despite not speaking his language. At lunch, she says she likes his other movies, and her costume designer Zoé reacts with surprise: "Oh, you do?"

Most interestingly for me, there's occasional discussion among Maggie and the other cast and crew about the nature and value of film itself. Maggie and Zoé discuss the Tim Burton Batman movies, on which her costume is loosely based, and they both express a general distaste for American films: "Everything is too much decoration, too much money." Later, however, an interviewer asks Maggie if she's familiar with the work of John Woo, and while she hesitates to either fully embrace or reject him and his films, the interviewer is adamant that his kind of big, blockbuster-style cinema is more populist and thus more true to the desires of the people than René's pretentious arthouse nonsense. This disagreement about what constitutes valuable cinema registers at the level of language because it defines how people understand and talk about movies. People even speak different languages when it comes to film.

But rather than come down on one side or the other of any of these debates, I think the point is instead to see the bigger picture, to take a more holistic view. These disparate discourses all become different languages within the text of the film, languages that often go misinterpreted or misunderstood, but rather than pick one of them, one language through which to translate all this metacinematic discourse, we can instead reach a kind of Hegelian synthesis of each hypothesis and antithesis. Because what's so beautiful about all this discord and all this miscommunication is that, in spite of it all, these people still manage to go on to make a movie, the screening of which ends the film in an unforgettably beautiful capstone.

Because I am a crazy person, Irma Vep made me think of both Winston Churchill's quote about democracy and Theodore Adorno's quote about poetry (by way of Antony Rowland's explanatory analysis). Like democracy and government, this way of making movies is the worst way of making movies — except for all the others. And like poetry after Auschwitz, starting from the premise that it is ethically wrong to make movies, we must concede that nevertheless movies are still made. And they appear as inarticulate, unimportant scribbling – because, in a sense, they are, but there's beauty in that inarticulacy itself, not in resolving its internal conflict but in that conflict itself.

"I understand René. It all makes sense to me."