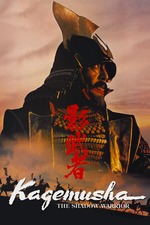 "The shadow of a man can never stand up and walk on his own."

Aging feudal lord Takeda Shingen and his samurai warrior brother Nobukado rescue from crucifixion a thief with an uncanny resemblance to Shingen in order to train him as a political decoy (a "kagemusha" or "shadow warrior"). After being mortally wounded in battle, Shingen gathers his trusted generals and orders that they keep his death a secret for three years in order to strengthen their hold over their domain. So Nobukado decides to use their decoy as a full-time double, and thus a peasant and a thief becomes lord of the Takeda clan, one of the most powerful clans in Japan during the Sengoku period.

Nobukado and the Takeda generals convince this criminal commoner to become Shingen — no easy feat, asking a man to forsake his identity for someone whose rule almost had him crucified, even if he was nobody before; "It's not easy to suppress your identity and become another." After this point, the tension of the narrative comes from the question of whether different people will discover this deception. Enemy spies keep tabs on Shingen to see if he dies from his battle wound (which he did, of course, but they don't know that), but there's also the clan's own subjects to consider: everyone from Shingen's grandson to his mistresses to his horse must be convinced of this masquerade or it all falls apart.

And while this tension is effective in a formal, almost Hitchcockian way, there's something more buried beneath it, and this thematic kernel is what I find so compelling about the movie. In the character of this kagemusha, whom we'll call "Shingen" for the sake of simplicity (and because he's never given another name), we find the marriage of peasantry and nobility and of criminality and law. Even though this shadow warrior is not literally Shingen, he stands metaphorically for the contradiction at the heart of all rulers, he represents the performative paradox of power. The sovereign always relinquishes their identity in order to acquire their position; they are always a kagemusha, whether literally or not.

The film makes this explicit in its discussion of shadows: "A shadow cannot exist without a person. When it becomes known that the person is gone, what will happen to the shadow?" This new Shingen is a shadow of the original Shingen, but there's also a sense in which Shingen was already a shadow of himself, a sense in which all leaders become shadows of themselves in their service to the state. The reason that shadow warriors are effective as a political tool is in part because power itself is a performance. Power behaves like a shadow: if the person wielding it disappears, then so does the shadow — but only "when it becomes known that the person is gone." A ruler can be replaced and still resemble the same shadow.

This is how the function of the kagemusha exposes the lie at the heart of the politics of power. Not only is power performative in the sense that it is not innate to those who rule, in the sense that it can be wielded even by a peasant thief who just happens to look like a lord (who just happens to fit the same shadow), power is also performative in the sense that it is always a deception, it is (metaphorically when not literally) always a criminal hiding behind a masquerade of noble legitimacy. Kurosawa even tells us this up front: in the first scene of the film, the old Shingen calls the soon-to-be new Shingen a "scoundrel," and New Shingen retorts, "A man who's killed hundreds and robbed whole domains is hardly the one to call me a scoundrel."

So it's only appropriate, then, that it's not the peasant thief criminal ruler who's the antagonist here, it's the facade of power itself. New Shingen has a dream in which he's haunted by the zombie-like apparition of Old Shingen; he finds himself tormented by the manifested embodiment of the performance he must live in now forever. The specter eventually disappears and he stumbles around his nightmarish dreamscape until he comes across a shallow pool that reflects his own visage back at him. He becomes his own double, a superficial mirror image of himself. Between the shadow and the warrior of Kagemusha, it's not the warrior that's the enemy but the shadow. It's not the lord we must dethrone, but their performance of power.