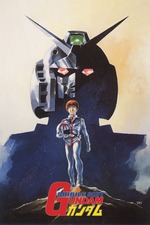 "That's what I admire about him: he knows he has to fight even if he doesn't want to."

Like the Neon Genesis Evangelion rebuilds, Mobile Suit Gundam I–III re-tells a story we already know: the three films consist primarily of re-cut and re-assembled footage from the television show of the same name, albeit with some changes made and new animation added by director Yoshiyuki Tomino, making the movies something like a director's cut of the show. I haven't seen the show, but despite its setting in outer space, the movie plays like any great Earth-bound war movie: as a treatise against war, as an examination of the fallout of war both on the mind and on society at large.

Mobile Suit Gundam I opens with a voiceover explaining that, while humanity has colonized outer space, "the cycle of life and death continues" — at which point this narration is abruptly and violently ended by an explosion in one of humanity's new space colonies. The cycle of life and death, humanity's existence in this universe, whether on Earth or in outer space, is defined by conflict, by war.

There's a curious example of the effect of this societal devastation on the human individual quite early on: Amuro's neighbor sheepishly suggests that if military engineers like Amuro's father hadn't come here to their colony, then… he says, trailing off before stating outright that Amuro's father and people like him brought the war with them when they immigrated. This laying of blame at the feet of individuals for systemic issues beyond their control is echoed later when colonists are forced to return to Earth and find its inhabitants fearful of them, averse to their desperate presence.

The thematic question at the heart of these conflicts is essentially what do we do about war, how do we act when faced with the terrifying conditions of its reality and its seeming inevitability, and the film answers this question with an exploration of courage. The people of Earth, for example, broadly respond to the war arriving on their doorstep with cowardice, refusing to help refugees in need of shelter and assistance, while Amuro and many of the other exiled colonists respond with bravery, tackling tasks for which they are woefully under-qualified but for which there is no one else to do what needs to be done.

Civilian refugees take responsibility for caring for the wounded, an untrained ensign is entrusted with the command of their interplanetary home base, and these are the conditions under which our hero Amuro undertakes command of the titular mobile suit Gundam. Our heroes are brave, but our enemies show a different kind of courage, courage taken to excess, courage taken to the level of arrogance. "You sound unusually humble." The initial conflict begins when a Zeon soldier opens fire because he believes that heroism is defined by winning battles, and he believes he can win against the impossible odds of an entire colony.

But the final point in this constellation of courage comes from the way that inhuman systems like the military industrial complex exploit humanity's bravery. "This war's killed practically every adult," we learn, so the story involves a lot of teaching civilians to fight and perform other military duties among the refugees, and while even very young children display courageous enthusiasm about joining the war effort, the film's nagging concern is that the war effort is extracting much more value out of them than they're getting out of their service.

Amuro's participation in the war quickly changes him from a bright, enthusiastic youth into a cold, distant loner, brushing past his childhood friend Fraw and rejecting the congratulations of the military base's children. He even objects to the military's treatment of him in explicit terms of exploitation: "The Federation Forces are just using us," he says, "They're working on new weapons as we speak." Amuro is just a kid who wanted to help, and the war ground him down into oil and used him to grease its own gears.

Mobile Suit Gundam I is thus not only about the destructive consequences of war, it's about the gravitational pull of militarization, the way it draws people in and slowly engulfs them, punishing them for their greatest strengths and rewarding them for their greatest weaknesses. "The first month of fighting saw each side lose half of their respective populations," and yet the war has raged on for almost a year now, it continues unabated, and it seems as though it might consume all of humanity.