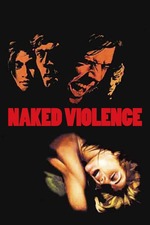 "The way things are today, nobody expects the police to worry about a kid once they've got him off their hands."

Our story begins in a classroom: the students stand up in the middle of a lesson, begin chugging a mysterious, cloudy liquid that we later learn is absinthe, and sexually assault and murder their teacher. This all happens underneath the opening credits, as if it's something normal to see, as if it's just an average, everyday occurrence — and to some extent it is. This is our reflection of Italian society during the Years of Lead, a time when criminal violence had become so pervasive that even 13-year-old students rape and kill their own teacher.

More specifically, this is a satirical reflection of the student protest movement that peaked in 1969, the year Naked Violence released to theaters. Students were rising up against systems of oppression nationwide, speaking out against capitalism and advocating for workers' rights, but while they weren't the literal children we see here, they were still very young, and they were occasionally a bit naive in their methodology (Elio Petri tackles this complex issue much more comprehensively in The Working Class Goes to Heaven).

We also see the other side of this equation: the impotent police force and their inability to contain the epidemic of crime sweeping its way through Italian city streets. Commissioner Duca Lamberti questions the kids until he's red in the face, but the bureaucracy of Italian law enforcement holds him back at every step. The commissioner's boss doesn't believe the evidence Lamberti uncovers from his (more or less) legitimate interrogations, and once Lamberti locates his perpetrator, he can't legally pursue them because "I need twenty permits before I can search that building."

There's even an important bit of nuance here: it's not that the law doesn't have enough power; that's the fascist way to frame the argument. The point is rather that the law is hopelessly convoluted, that it's a victim of its own chain of command. And on the other side of things, in the film's satirical representation of organized crime, the kids present a caricatured vision of the criminal code of omertà or "silence": they all conspire together in solidarity, saying "I'm not a spy" and refusing to speak out against their other classmates.

But while the film's portrait of crime in Italy during the Years of Lead is a faithful one, its presentation of the causality of this criminality leaves a lot to be desired. Lamberti investigates alongside social worker Livia Ussaro, and Ussaro offers a systemic understanding of the origin of this specific crime in particular and of Years of Lead crime in general: these kids are all from lower class families, they're all struggling just to survive, they get sent to night school so they don't spend their free time getting into trouble in pool halls. They are living evidence of the failure of social welfare.

But the movie has other ideas. Di Leo seems to disagree with Ussaro: it's not society that makes bad people, not the corrupt Italian power structure that corrupts the lives of average, everyday civilians, no! It's [hold your breath and maybe stop reading if you don't want the ending spoiled, but personally I would have rather had the ending spoiled for me than sit through the entire movie for this awful of a conclusion] the gays! A homosexual cross-dressing pedophile fell in love with one of these 13-year-old kids and orchestrated the whole thing.

After all this, the movie pins the ills of society on an easy target, a queer social outcast. If only these perverts would stop corrupting our youth! Oh well. It's early Di Leo, and it shows. Maybe his personal politics wouldn't get much better throughout his career, but at least his later movies weren't this boring.