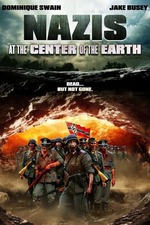 Nazis at the Center of the Earth

This. This right here is why I watch these stupid Asylum movies. It shows all the same signs of being cheap and rushed, but buried deep within the stupidity and ineptitude there's a passion that manages to shine through.

There are two reasons I think this (arguably) succeeds where their other movies fail.

First, it keeps the plot simple and straightforward. There's the ridiculous nonsense of the premise, but from there everything proceeds in a mostly natural way: a remote scientific expedition searches for a couple of lost members and find themselves trapped. There's a completely ludicrous turn in the third act, but the build up to it is so measured that it feels justified. There are isolated scenes which don't work, but there are relatively few plot points which simply don't make sense.

Second, the movie is lit with such consistent vision that you can almost call it atmospheric. The early scenes in the movie are all fairly bright, and as the characters begin their descent the shadows and darkness become more imposing. Again, the nonsense of the final 20 minutes or so basically throws this out the window, but credit where credit is due. Most of the movie feels like someone in charge actually had an idea of what they wanted to see.

The CGI is still painfully obvious and the dialogue is still as vacuous and insipid as ever, but these failures are no worse than any other Asylum feature, and where it succeeds makes it stand out against the rest of the garbage.