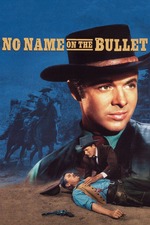 No Name on the Bullet

"There's only one thing to do, and that's beat Gant to the punch."

No Name on the Bullet is a western horror film that takes the heroic western outlaw and turns him into Freddy Krueger—but instead of killing people in their dreams, he kills them with their own fear and guilt, with their own pernicious rumor-mongering. I often hear westerns praised as poetic, but No Name on the Bullet is less concerned with the poetics of the Wild West and more with a philosophical inquiry into the morality of small-town law and order.

John Gant arrives in a supposedly innocent town of Lordsburg, Arizona, but his reputation has beat him there. Almost everyone knows him as a ruthless murderer who hasn't been thrown in jail because he forces all of his targets to defend themselves in front of witnesses, turning his murders into supposed self-defense. But here's the thing: from the moment he enters the town, he's not violent or aggressive toward anyone.

He stands his ground when challenged, but he's actually rather polite otherwise. It's his presence that drives everyone mad, not anything he actually does. Simply by being there, he brings out the worst in everyone; but only because they know—they think they know—that he kills bad men, and they all begin to suspect themselves as the bad men he's after. A living state of exception, he embodies the necessary but unspeakable exclusion on which the communal inclusion of the town is built. He confronts the town with its own guilty conscience, with the lie of its own supposed collective innocence.

As more and more townsfolk are driven to fear and paranoia, they band together and form an angry mob in an effort to try to throw him out. While their fears ultimately turn out to be justified, that doesn't discount the fact that the one lone rider from the frontier has turned this small society into its ugly, violent underside—the rabble, the uncontrolled masses, the gang. He turns a community which is supposed to be the saving grace of the world into its opposite. He undermines the purity of the western's spread of civilization.