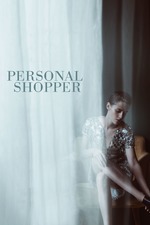 I fear death. I mean, who doesn’t, to some extent, but for me it sometimes becomes an overwhelming preoccupation, a sense of dread at the nothingness that must come after life that prevents me from doing the one thing that we as human beings can do to avoid death: live. My fear of death has the power to immobilize me, and this power occasionally holds me back from living my life.

And this is ultimately what I found so compelling about Personal Shopper: horror films (whether this is one or not, it clearly engages with ghost and haunted house tropes) often use the symbolism of their genre elements to navigate the thematic space of psychological processing, and here Olivier Assayas participates in this cinematic tradition in order to explore the ramifications of this type of preoccupation with death.

Maureen Cartwright is a medium, and her brother Lewis — also a medium — died sometime shortly before the movie begins. This is as sensible a reason to be preoccupied with death as any, but it has entrapped Maureen. She is stuck in Paris, living a life she hates, wishing she were someone else, waiting for her brother to contact her from the afterlife. When asked what she'll do after Lewis contacts her, she responds, "Then I guess I'll live my life and let it go," but until that time she can do neither of those things.

But while Maureen's spiritualism seems to be holding her back, Personal Shopper shows us another kind of spiritualism as well. Hilma af Klint was a Swedish avant-garde abstract artist who claimed that the inspiration for her paintings came from the spirit world, and Maureen ends up studying her at the recommendation of a couple of potential homebuyers interested in the house where Lewis died. Whereas Maureen's preoccupation with death seems to only generate inaction, Hilma af Klint's inspired action, it motivated her art.

I'm not here to say whether I believe that there is or is not a life after death; the point of this discussion is to see how humanity's fascination with the afterlife functions as a metaphor for psychological processing, and here Olivier Assayas essentially uses it to send Maureen to therapy. She has suffered an immense psychological trauma, after all, and who better to serve as a therapist for a psychic medium than a ghost?

Maureen begins receiving text messages from an unknown number, and whoever this mysterious messenger may be, Maureen starts talking to them as she would a psychoanalyst. Together, they explore her fears and her desires and their interconnectivity: how she fears to try on her boss Kyra's fancy clothing, and how the fact that it's forbidden to her makes it all the more desirable. So Maureen starts trying on Kyra's clothes.

And while wearing your boss's fancy clothes may not be the kind of emancipatory inspiration or artistic endeavor that Hilma af Klint embodied, Maureen's gradual transition here marks her beginning to live her life once more. Maureen uses her connection with the spirit world (through the technological psychic medium of her telephone) in order to shift from inaction back to action. She uses her preoccupation with death in order to return to life.

This, I think, is the best we can hope for when it comes to facing down our fear of death. For me, this comes in the form of writing a book in order to have something to leave the world after I die. Does having a book make my fear of death go away? No, but by using that fear to motivate my writing, I transform it into something productive and meaningful. Because whether there's life after death or not, there's nothing here in this world but us. It is just me.