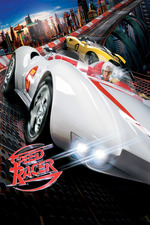 "You think you can drive a car and change the world? It doesn’t work like that!"
"Maybe not, but it's the only thing I know how to do, and I gotta do something."

Too much to say about this one to ever do justice to it. It's ⅓ avant-garde children's cartoon, ⅓ Sirkian family melodrama, ⅓ corporate-crime neo-noir, and I just love all of it.

The Wachowskis shoot time the way Dr. Manhattan sees it, cross-cutting from Speed racing at Thunderhead to Rex racing at Thunderhead to Speed as a child then back and forth all across this lifespan until finally the past overlaps the present and we see Speed racing against Rex’s ghost, two timelines existing simultaneously. D. W. Griffith eat your fucking heart out, this is the greatest parallel editing in cinema history.

I feel like the melodrama is what loses most of the people who make it past the overwhelming visual aesthetic. There's an earnest sentimentalism that maybe feels too simple or too straightforward for them. There's something in the way Mom tells Speed that she's "so impossibly proud to be your mom," and I guess I can see how that doesn't work for everyone, but it just melts my heart. At the thematic core of it, it's not even that different from The Matrix: (familial) love defeats (capitalist) power. But here we edge into the territory of what I've dubbed the corporate-crime neo-noir, and it's here that the movie really comes together for me.

"It doesn’t matter if racing never changes. What matters is that we let racing change us."

Changing racing is an overwhelming goal — how can we change an entire system of power all by ourselves? But the ultimate wisdom that X passes down to Speed is to focus on individual change over systemic change, to forget changing racing and instead let racing change him. And so he does; Speed lets racing to change him, he allows the sport to turn him into a political race car driver, he joins the fight against Royalton and his vast syndicate of corporate crime even though he knows the fight is unwinnable, and by letting racing change him he changes racing.

The trans version of this message reads something like this: we may not magically make the entire world better or even less transphobic overnight by transitioning, but we do make some small part of the world more welcoming by welcoming ourselves into it. Speaking more generally, what the film tells us is this: we are part of the system, so if we change ourselves, then we are changing the system along with us. Individual change is systemic change.

So let yourselves change, knowing that the bigger, broader change is slow but not impossible, and knowing that you are a small but not insignificant piece of that larger movement. We may only be trees, but without trees there would be no forest.