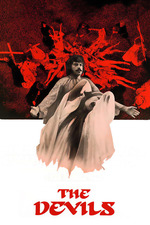 "Now there's a man well worth going to hell for, eh?"

The Devils opens with a play, a performance by Louis XIII depicting the birth of Venus, the goddess of divine love, an image that will eventually come to carry an immense and brutal ironic weight. The audience carries on with all manner of obscene, licentious debauchery, while Cardinal Richelieu, who is also attending but not exactly participating in the same way, takes the opportunity to discuss business. Richelieu wants to demolish the various urban fortifications throughout France in order to stifle Protestant uprising; he proposes a marriage of church and state in the name of security but with the ulterior motive of religious repression.

Cut directly from this vulgar display of bourgeois sexual freedom to the small town of Loudon, a community protected by precisely such urban fortifications in which this marriage of church and state has already effectively taken place. Catholic priest Urbain Grandier is not only the area's most popular preacher, he's also its de facto governor, as the previous one passed away and left him in charge. But unlike the royal perversion that preceded this scene, Loudon is instead characterized by sexual repression: a monastery is bursting with nuns who only joined because they were too poor or ugly to marry and who scramble to see the immensely attractive Grandier.

This early juxtaposition characterizes the rest of the film. For the wealthy and the powerful, sexual liberation is a given, a fact of life so taken for granted that it becomes entertainment, while the poor and the disenfranchised suffer under religious and sexual repression so severe that they have begun to police themselves, they have begun to self-subjugate. Sister Jeanne des Anges, the abbess of the local monastery, is incredibly strict with her nuns while hypocritically masturbating to thoughts of Grandier walking on water like Jesus Christ. Talk about "divine love": here religious worship and sexual arousal are inextricably intertwined.

But it's not just that Sister Jeanne is being hypocritical, it's that she has become an unwitting tool of the state. This is how power functions, this is its foundation, this is the subjugation that allows repressive systems like this to flourish. Or, to be more specific, this is ideological interpellation, this is the colonization of the mind: the ruling class represses religious and sexual freedom, and the people adopt this repression for themselves, as their own, while for the aristocracy morality is merely performative. It is all a play for them, but for us it is reality, at least in part because we make it our own reality, because we take their performance as gospel.

Here we see exactly how dangerous this performance can be, because The Devils also ends with a performance, in a sense. The film closes with a very different kind of entertainment, a deadly kind, but one which is treated as entertainment nonetheless. This speaks to the collective boredom of this world and its desperation for amusement, its collective cry for pleasure in a repressed society where pleasure is denied, but it also speaks to the role religion plays in these people’s lives. Religious morality is performative for them, and when a society’s morality becomes performative, that society becomes capable of the most unspeakable evils.

When he's accused of witchcraft (a surrogate-accusation used in place of what people really object to, his moral corruption — a priest getting married, the horror!), Grandier defends himself by stating, "I have been a man. I have loved women. I have enjoyed power." I think I essentially buy Grandier’s implied argument here that he had flaws, yeah, but they were human flaws and not the flaws for which the more-flawed society punished him. He was punished instead for being super hot, for being attractive to a bunch of women who couldn’t have him, for being a sexual entity in a repressed and repressive society, and for acting upon his sexuality.

The Devils depicts the fight of human individuals against inhuman systems of power. Flawed people like Grandier have power, yes, probably more than they rightly should, but they are not the enemy, they are not even a symptom of the larger sociological disease. The real disease, the true enemy, is the systems of power that suppress a nation's people and the ideology they disseminate in order to keep those people subjugated to those systems. Grandier was not the victimizer, although he was certainly a victimizer. He was a victim. He was the bait on the lure of systemic sexual repression, so of course he had to be eaten.

"Satan is ever-ready to seduce us with sensual delights!"