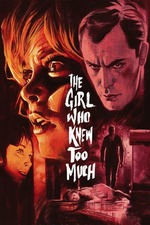 I recently picked up the wonderful Arrow blu-ray of The Girl Who Knew Too Much (reviewed here), which also comes with the English-language version of the film (retitled Evil Eye), so I decided to check it out. It's hard to explain exactly how disappointed I was. The Girl Who Knew Too Much was the most exciting new discovery I'd made since watching Inland Empire for the first time last month, and Evil Eye took away almost everything that I loved about it. It's not just a dub of the film: they used different footage and entirely new scenes which were previously cut. The overall arc of the narrative is basically the same (it's still a murder mystery), but all of the flavor has been removed.

The central performance is more shrill and "feminine", eliminating the possibility for my feminist reading of the film. The male love interest is no longer the bumbling sidekick, and instead he's twisted into a hero trying to save Nora from her unhealthy obsession. The dynamic soundtrack which succeeded both at loud exuberance and quiet subtlety is replaced with a score that knows only how to be loud and obvious. Broad comedy scenes which were cut from the film originally because they didn't work are added back in to lighten up the whole affair (the original cut of the film was certainly not without Bava's strange comedic sensibilities, but they were balanced against the tension and thrills).

The one change I actually liked was the ending. Spoilers for a version of the film I think nobody should watch coming up. At the end of Evil Eye, Nora has promised to give up her love of murder mysteries. Her love interest sees it as a detrimental past-time (and in this version the audience is supposed to side with him), so it's supposed to be an improvement. But then in the final scene of the film the couple witnesses another murder, and we can see from the look in Nora's eyes that she'll never really be able to give up her passion. This is played as a moment of horror, and while in this version it seems like an indictment of her character (i.e. "Oh no, she's permanently traumatized by her own devious desires!"), transposed into the original cut it is more revealing than critical.

Everything else is so much worse that I even began to question my initial reaction to the Italian version. This alternate take is a true testament to the power of details and light touches: by a few small changes, someone has turned a movie I fell in love with into a movie I'd rather not see again. At least I can always go back to the original.