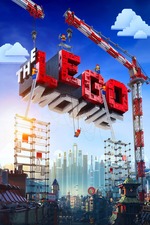 Definitely a bit apprehensive about revisiting The Lego Movie as it's been in my top 5 for the year since I first saw it in theaters, but while it loses some of its impact on the smaller screen it was still just as much fun as I remembered. Toy Story meets The Matrix, it somehow manages to combine some of the best of both movies: the genuine emotional core of the first and the dystopian ideological critique of the second. The animation is still heart-stoppingly gorgeous especially considering it's essentially from a new studio (albeit with plenty of money to fund the project).

A few of the jokes feel a little thinner than I remember, but I was still consistently laughing out loud and smiling from ear to ear during "SPACESHIP!" (Love you, Benny!) Not sure it needs a sequel and I can't really imagine it will fare as well, but at least they're taking time to get it right. Hopefully we'll get something the caliber of a second Toy Story trilogy instead of a second Matrix trilogy.

Aguirre, the Wrath of God