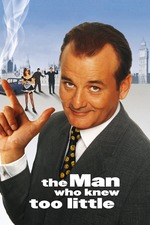 The Man Who Knew Too Little

I just love the premise of this movie. Bill Murray is a naive buffoon who thinks he's participating in a "Theater of Life" program where people pretend to involve him in a mystery/thriller-type plot, but he accidentally takes the wrong call and becomes involved in a real life conspiracy instead. It's an excellent parody of the action genre, and unlike most spoof movies (Airplane! being a notable exception) the jokes and references aren't dated more than 15 years later.

About 2/3rds of the way into the movie, Bill Murray says something about how they're all acting in the Theater of Life, a statement which wonderfully showcases the different levels the movie operates on. As the buffoonish Wallace Ritchie, he's saying quite simply that they're all in a production put on by the Theater of Life company (as he understands it). As the pretend (but also sort of real) secret agent Spencer, he's delivering the stale platitude that would fit his character (as Lori understands it). In turn, this also functions as a satire of the action genre in general, about how action heroes have run out of new things to say and never have any real depth or complexity.

It's a pretty conventional comedy that doesn't push too many boundaries, but it sure is a fun time.