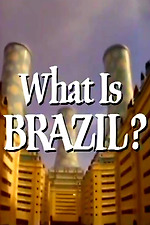 What is Brazil is a behind-the-scenes documentary on the making of Brazil, but although it would be hard to deny that it goes behind the scenes, it shines disappointingly little light on the making of. It's a little too short to get much of an impression of anything beyond the fact that it was more than just another movie, that there was something special about it which could be felt even during production.

It does have Michael Palin though, and just about anything he touches turns to gold. He pretends to be his own personal assistant, and pretends to give an interview on the phone when there's obviously no one on the other end. It's almost worth checking out for his bits alone.

The strangest thing about this documentary is the way it ends. It closes by asking its many interviewees the question, "What is Brazil?" None of them have a clear answer, and many of them don't have an answer at all. It seems as though the documentary is trying to tell us that nobody knew what was going on behind the scenes, as if everything was in chaos and it's only by some mysterious miracle that the film enjoys the cult status is has today. I think more likely it was trying to go for the message that it's simply too dense or even too absurd a film to explain in a quick soundbite, but then why make a 30-minute making-of if that's the case?

Ultimately I'm glad this was made as it's always fun to take a peek behind the curtain even if we don't really get to meet the wizard. It might not have much to say about the film, but it's entertaining and won't take up much of your time.

And it has Michael Palin, so, you know, there's always that.

The Battle of Brazil: A Video History