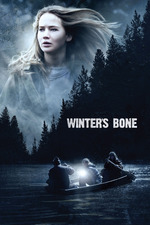 Winter's Bone is a narrative compilation of the missing footage from The Hunger Games portraying Katniss Everdeen and her struggle to live in the poverty and squalor of District 12.

If the Oscar nominations weren't enough of a clue, this movie's greatest strength is in its characters' writing and acting. Jennifer Lawrence fully realizes her potential as the audacious, resilient and nurturing Ree, the 17-year-old daughter of a mentally absent mother and physically absent father forced to care for her two younger siblings. John Hawkes also gives a wonderful performance as the frightening but oddly sympathetic Teardrop, Ree's drug-addicted uncle.

Ree must find her father and make him appear in court or lose her family's home which was put up as his bail bond. The man was a drug dealer and notoriously good at hiding when he didn't want to be found, and to make matters worse the community has a rigorous code of silence in these matters. All the people Ree talks to not only send her off without a clue but often punish her for even asking. Ree's perseverance brings a few to her aid, but the closer she gets to the violent men and women who might know where her father is the more she feels her own life at risk.

I haven't read the book so I can't speak to the fidelity of the film's adaptation, but as a movie and nothing else the writing is really quite excellent in its ability to bring out the personalities of the characters involved. From Sonya, the next-door neighbor who wants to help but is afraid Ree wants to know too much, to Sheriff Baskin who wants to keep order in his community but knows he's up against forces that are stronger than him, to Merab who knows the power of fear but begins to feel her grip slipping when Ree doesn't back down.

Beyond the characters and writing the film is pretty much what you'd expect from an indie production. There are some lovely wide landscapes shots, but for the most part the cinematography is what I think of as "invisible": it captures the chaotic beauty of the locations and the emotion of the actors but doesn't stand out on its own. The editor paces the film's descent well, although it's often difficult to see light amid the overwhelming darkness of the story (there's one awesomely dark-comic cut toward the film's end he deserves a lot of credit for).

If I may briefly take issue, I love Ree for her strength and solidarity but she doesn't change much during the film and as a result it's hard to find meaning in the film's bleak melancholy. Teardrop, for instance, is a more interesting character to me because the man we first see as violent and intimidating slowly reveals his softer, more vulnerable side and we can see what this life has done to him.

Seriously though, if you combined this movie's level of character and writing with the dystopian class conflict of The Hunger Games you'd get a movie I think I might never tire of watching.