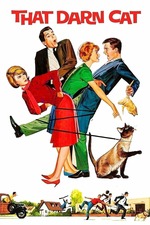 This Disney Family Film starts off with bank robbers threatening to murder a lady. Seems weird.

But... it gets lighter from there.

Although whenever the bank robbers show up (one of which is Frank Gorshin, the Riddler from the old Batman series) the tone does revert back to the darker side. A bit odd for a Disney flick.

I think this movie needs more of a "bumbling bad guys" aspect to it. As is, the tone is a bit off - jumping from lighthearted to serious and back again.

However, that aside, the rest of the movie is pretty solid. Of course, it does revolve around a finicky Siamese cat... which - if you're not a cat person - can be a bit hard to root for. Heh.

But, Hayley Mills and Dean Jones are both VERY likable onscreen and give the movie some much-needed lift. So that's cool. Plus the old bickering couple are a lot of fun as well (very reminiscent of the bickering couple from the old school TV show "Bewitched").

I don't have the nostalgia attached to this film as a lot of people do, but I still remember being shown on TV from time to time. If you haven't seen it, it's worth the effort to seek out.