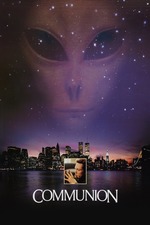 Mora nailed the dream-like atmosphere and simplicity of the aliens. There are moments that are truly terrifying. Allowing Walken to be free was a bold choice and created a fascinating if not epileptic character study. Perhaps he didn't take it as seriously as he could, but the end result is better than if he had. His behavior on the space ship was a bit troubling. Did he kiss that blue alien? At one point when his wife is talking to him he grabs an invisible fly from the air. The movie is filled with these little Walken nuances. We're left with a nice New Age-y happy ending, better than I had hoped. It seems like no matter what I expected, Walken and Mora were a step ahead of me delivering what I didn't even know I wanted.