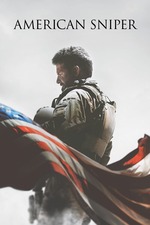 [This one wound up way longer than I’d anticipated. TL;DR: American Sniper was decent, but the story deserved better.]

It’s been a rough week for movie reviews: between Selma and American Sniper, the films we chose have become synonymous with their broader social themes. In one snarky tweet about a trailer, Seth Rogen’s image pivoted from jingoistic Team American (cue left-wing overreactions) to America Hater (cue right-wing overreactions) faster than you can say “clickbait.” Not that that’s unexpected: it’s hard to be flippant about a film without seeming flippant about its message. I may have thought Selma’s award-nominated rap sounded like a parody of actual Common songs, but leaving the theatre, I didn’t feel like trashing it. Even if “justice is juxtaposition in us” feels phoned-in, the loudest cry – “glory” – rang true.

Here’s the good news: despite being “the story of the most lethal sniper in U.S. history”, American Sniper doesn’t deserve its controversy. The film centers around a man thrust into a harrowing war, it never once plays like a Navy recruitment ad. Bradley Cooper portrays Chris Kyle with respectable, editorial-free restraint: neither comfortable with his fame nor particularly tortured by his actions, he’s just a guy who keeps moving forward. I don’t know anything about the real Kyle, but his filmic counterpart is humble, gentle, and free of artificial glow. You can see what made him so loved, and it has little to do with a number. With the exception of an ultra-fictionalized enemy sniper (who, par for the course, seems to have dropped by on the way to a Jafar audition at Disneyland) the war scenes also felt remarkably, even-handedly true. Those criticizing Clint for being “jingoistic” either have very different criteria than this bleeding-heart liberal, or they never saw more than the trailer. His Iraq is a gritty and discomforting place, where human life vanishes not with Lone Survivor slowmo or Spielberg crescendo, but a muted whimper. Like the excellent Hurt Locker and Zero Dark Thirty, war is seen as a numbing, all-consuming force – and as with Bigelow’s protagonists, it leaves complicated scars.

Unfortunately, a fairly good war film is mingled with a pretty poor biopic. If Eastwood was committed to authenticity on the battlefield, he seems wholly disinterested in the personal front — which is arguably the crux of the film. Nowhere is this more clear than in the “parenthood” scenes, in which characters have dramatic arguments while cradling the most /distractingly/ fake baby doll I’ve ever seen; hushing its looped baby cries while its rigid arms dangle. Obviously that’s a minor point, but I can’t help but feel it’s symbolic of the broader emotional core, wherein real, breathing feelings seem to be replaced by lifeless, off-the-shelf substitutes. Kyle’s pre-war history felt obligatory and impersonal, his meet-cute and marriage read like Nicholas Sparknotes, his PTSD (despite laudable screen time) is given surprisingly little depth, and his (deeply moving) post-war recovery is tacked on as a postscript. Cooper’s subdued charisma would have been fantastic if the script supported it; here it only amplified the problem. Like fame, ethical dilemmas and emotional pain seem to just happen to Kyle. They’re narrative “demons” rather than feelings, communicated just enough to remind us of their existence, battled and healed almost entirely offscreen. Nothing seems personal. It felt like Eastwood wanted to make the movie his trailer promised, but lacked the audacity it demanded: he praises bravery without having much to say about it, shows ethical dilemmas without acknowledging their consequence, and pays homage to trauma without implicating its root. Teetering in some purgatory between the typical War is Hell and Hell Yeah, it settled for something less satisfying: War is. Kyle just is. Never wrong enough to offend, never right enough to linger; perched 2000 yards out, unreachable.

Like Selma the film concludes with a real-life montage, and like Selma I was in no mood to criticize. It was a moving tribute. But I couldn’t shake the feeling that the person I was mourning had almost nothing to do with the muted persona I’d seen on screen. I felt for the real Kyle I knew nothing about, who lived with decisions no person should endure, and whose scars surely ran deeper than an audio cue. Hero and villain in the public eye, a real man bearing the weight of a symbol. I have no dog in the fight regarding which one he was. But that juxtaposition would have rung truer than moderate, restrained “glory”.