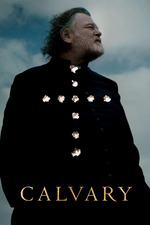 I like to think there exists a parallel universe where God’s Not Dead and Heaven Is For Real were never made, and Father James is the most talked-about faith-centric character of the summer. Three parts In Bruges, one part A Serious Man, and just a dash of Waking Life, Calvary (not, as I thought going in, “Cavalry”) begins in a confessional, where an unknown congregant tells the priest that he will murder him in seven days. While that’s tentatively the “plot”, its real power comes as a catalyst for conversation, as Gleeson’s Father James tries to minister one last time to his varied, depraved congregation. Pitch-black funny, brooding, masterfully acted and surprisingly moving, Calvary asks how one can have faith in a world that may have outgrown it, or forgiveness towards people and hypocritical institutions that don’t deserve a shred of it. The closest thing it has to an answer is to put down the gun, pick up the phone, look depravity in the eye and let it speak.

I loved this movie. I found it emotionally riveting, captivating, and wise.