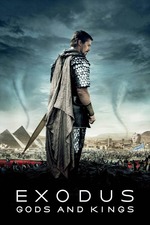 I almost feel guilty saying anything about Exodus: Gods and Kings. That’s probably why it took a week after recording the podcast for me to finally link to it. Some things are so bad they’re fun to talk about; others are so soul-crushingly bland, you feel ashamed for throwing in $12.

Much has been made of Ridley Scott’s refusal to cast “Mohammad so-and-so”, and while the film is certainly white-washed (including an inexplicably Yiddish Bale and borderline-blackface Mendelson), that description goes way beyond skin color. Everything is inexcusably bland: there are zero rough edges, no interesting (hell, I’d settle for “discernible”) point of view, nothing to elevate it above a way-too-long cinematic for a Bible video game your racist uncle never lets you actually play. Aronofsky’s Noah was far from perfect, but at least it took compelling risks (the creation visuals, the Abraham/Isaac third act, the much-derided rock monsters): this takes a massive, practically-made-for-Hollywood story, and emasculates it into some vague pile of sandals and eyeliner. The exploration of faith is devoid of content, the characters are so worthless their emotions actually made my audience laugh, and the few artistic decisions Scott makes are more or less schizophrenic in their philosophy/theology/not-really-worth-dignifying-with-an-ology. Even the money shots, when not inexplicably absent (see: the burning bush, the staff turning into the snake, the actual parting of the Red Sea) are hollow and by-the-numbers. As a film student’s CGI showcase it might get a passing grade. As a waste of $140M, it’s practically a social crime. That’s probably why the credits (seriously) mention how many jobs the film created: whether director or pharaoh, if you’re going to throw away extravagant amounts of money and dismiss entire people groups to build an absurd monument to your manhood, you’d better throw in a line about “economic stability.”