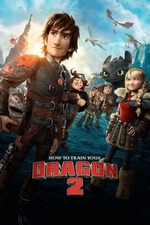 The original How To Train Your Dragon was a wonderful movie. It was beautifully rendered, playfully acted, and fun; but plenty of unremarkable things are. What made it fly above the pack was its simple emotional core and ability to communicate awe through the lens of its protagonist — making the small/personal feel big so the big would feel massive. It was like an upside-down Gravity.

That’s an amazing trick which could only work once, and How To Train Your Dragon 2 wisely didn’t try to repeat it. Instead it decided to elaborate on the massive world the other left in its wake: stakes were higher and the story broader in scope. It pulled it off about as well as it possibly could have, and did no disservice to the original. Kids will probably love it — it’s a great kids’ movie, way better than (say) Brave. But only a kids’ movie. Those of us who found magic in the quiet and personal will see it homaged here but never quite recreated. Like a sequel to a romance, it might deepen or expand on the same sort of love, but it won’t have the thrill of falling.