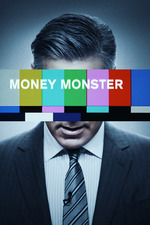 An utterly baffling moviegoing experience. No pathos. No urgency. No fangs. No point. It's safer than a savings account, with none of the comfort safety is supposed to bring.

From the cringeworthy opening sequence to the languid, momentum-deflating pace, it's clear that Jodie Foster doesn't have much experience behind the camera -- and that's fine. I expected that. It's the fundamentals that surprise me: telling a story, having a message, connecting with characters, giving the audience any reason to keep watching. You get the sense that she ("she" being a lazy shorthand for whatever committee created this monster) hasn't even seen a movie, or talked to a human about the 2008 financial crash, or (certainly) ever tuned into the network programming she's so eager to skewer.

No one matters in this movie. No one is likable, or reasonable, or sympathetic in any way. They aren't even people. Clooney's talk show looks like what a repressed Amish child might imagine talk shows to be: a bizarre blend of Morning Zoo radio and hip hop and hedonism and "balls." The populist outrage at the movie's core is vague to the point of uselessness: the problem with Wall Street is, um, it's all just ones and zeroes and...and...they treat numbers like...well, like numbers I suppose. And what run on numbers? Algos! Algos made by coke snorting KOREANS for god's sake! But no, the real culprit is the human fingerprint -- specifically the fingerprint of Dominic West as he types the world's slowest iMessage in plain view of his mistress. He's the reason people are angry with Wall Street, the cheating, jet-owning bastard. And don't even get me started on Mambo, sheeple. Is any of this generalizing?

There is precisely one entertaining moment in the film, and it doesn't come from the star-studded cast. It comes from Kyle's wife, and it elicited a very real laugh from my audience. Half due to genuine surprise, and half due to an overcompensating relief that finally, _finally_, something made us feel something amidst the otherwise long, drawn out fart we'd been enduring. I thought maybe it was a sign of good things to come, a sort of self-aware wink that said "We know how cheesy this looks, and we're about to subvert the formula in a major way."

Unfortunately, subverting a formula requires understanding the formula. Money Monster would be lucky to simply be formulaic, predictable, cheesy. It's much worse than those things. It's nonsense.