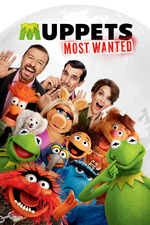 Like the LEGO Movie, the 2011 Muppets film managed to take a conceit I was prepared to hate and turn it into something charming and wonderful. Both films came with a message that while the world can be a cynical place, an imaginative spirit trumps all. It’s a story that’s been repackaged a thousand times, but somehow it always feels relevant.

Maybe it’s the lack of a Chris Pratt / Jason Segel man-child character to ground levity in heart, or maybe you just can’t ride the nostalgia train twice. Whatever it is, the second movie didn’t live up to what the first promised. It had self-referential jokes, decent music, and all the ham-fisted acting and pointless cameos you’d expect to make up a fun film, but it felt less like a heartfelt story and more like a writer proving to his friends how funny he is. Which he is. But there’s an ocean between objectively recognizing “funny” and actually having fun, and this one couldn’t bridge it for me.