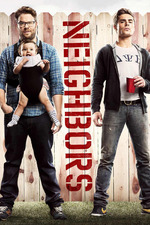 It’s easy to hate on the Apatow crew now that they run the world. But when The Forty-Year-Old Virgin came out nearly a decade ago, it set the standard for a new breed of comedy: loosely scripted bro fests which were both “unbelievably vulgar” and full of heart. Knocked Up and Superbad continued the trend in a way that my 18-year-old self found absolutely envelope-pushing.

In hindsight it’s funny to remember that these movies used to be “edgy”, just like American Pie used to seem “crude”. The formula has repeated itself so many times that movie reviews with words like “raunchy” and “riotous” are almost always a sign of eye-rolls to come: mediocre comedies like Role Models or 21 And Over run on the principle that “if it was funny once, it has to be funnier with twice the bro-hugs and penis jokes”. Neighbors wasn’t quite this bad: it had some genuinely funny moments, clever Community-style meta humor, and particularly strong comic turns from Zac Efron and Dave Franco. It also had its fair share of painfully unfunny actors-one-upping-each-other banter, emotional beats with no buildup or payoff, and “crazy” party scenes that were way less entertaining than they seemed to want to be. It couldn’t commit to the classic Apatow heart or the Pineapple Express / 21 Jump Street insanity, so it settled for that just-OK purgatory where plenty of comedies go to be forgotten. But OK is sometimes good enough. It’s scattered, energetic, and making more noise than it has any right to, but if you turn off your brain you’ll probably have a pretty good time. Even if you don’t remember it in the morning.