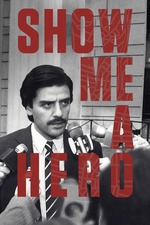 Show Me a Hero

I've been cramming a lot of movies into the past week or two, and quite a few are worth evangelizing. But the real thing I want you to see is Show Me A Hero, the 6 hour HBO miniseries created by Dave Simon (The Wire) and directed by Paul Haggis (Crash), which was so good I lost a night of sleep binging it. The setting is 1980's Yonkers, New York; the main characters are a mayoral candidate and an elderly homeowner; and the subject is court-mandated low-income housing. Sounds thrilling, right?

It actually is, but it's so much more. If you're familiar with Simon's work, you know that entrenched social hierarchies can make for great television. You also know the camera will follow everyone: politicians, lawyers, protesting homeowners, addicts and dealers and kids in the crossfire. What you might not expect is its immediate relevance. The Yonkers crisis hit a nerve that's uniquely exposed today: the political tug-of-war between between the ideal of openness and the security of walls, and a rhetoric which paints the two as mutually exclusive.

Show Me A Hero has its handful of justice warriors and blatant racists (and the populist demagogues who would exploit them...Alfred Molina chews scenery as a prophetic pre-Trump), but so much of the show is about that realistic middle; leaders who "do the right thing" as a pragmatic convenience, citizens who resist change not out of hatred but fear. Oscar Isaac, Catherine Keener, and a fantastic Carla Quevedo give these characters a relatable, human depth. Which leads to the most surprising aspect of all: beneath the heartbreaking tragedy and political doublespeak, I found the show to be downright uplifting -- and not only because of the Springsteen-heavy soundtrack (though it certainly helps.) Problems aren't intractable. Gridlock is temporary. Good people frequently make mistakes, and "hate", often rooted in misplaced good intentions, can vanish with exposure. We all know this as an empirical truth, but it's dishearteningly rare to have it depicted in our stories. Show Me A Hero depicts it with art, soul, and urgency.

(P.S. As someone who was curious how much Simon had molded to story to match today's political climate, I found Sussman's appearance on Morton Downey Jr's talk show eye-opening. Of course, it sounds like Morton was to the 80's what Jerry Springer was to the 90's and Glen Beck is today, so it's really bottom-of-the-barrel stuff we're watching. But it's amazing to see just how heightened the passions were, and how accurately Jon Bernthal portrays the lawyer at the center of the controversy.)