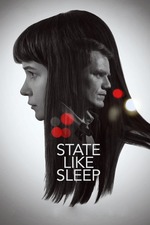 The festival isn’t over, but I’m calling it now: State Like Sleep (4.5/5) is the best film in competition at Tribeca. It’s not even a fair fight. Tonally hovering somewhere between Blade Runner and In The Mood For Love, Meredith Danluck’s debut feature is a dreamy, synth-infused meditation on grief and the pain of letting go. Not the letting go of people, per se, but of the thirst for hindsight rationality — that gnawing urge to trace tidy narrative arcs over events that rarely yield them. It’s about the endless “if only I’d” and “if only they’d”s that mutate passive hurt into proactive obsessions; in other words, it’s the perfect thing for noir to dissect.

The less you know about plot the better, so I’ll stick to the basics. A young fashion photographer (an outstanding Katherine Waterson) has moved from Brussels to New York, following the unexpected death of her celebrity husband (Michiel Huisman). “Fled” to New York might be a better term: faced with trauma so overwhelming as this, she has chosen instead to vanish, leaving her life (like their shared loft apartment, and her unspoken guilt) cryogenically frozen. When a phone call brings her back to the city, and new evidence slowly comes to light, those feelings begin to thaw.

Have you ever kept your hand out in the cold so long, that the first hints of warmth (a pocket, a hot breath) actually hurt? It isn’t a burning sensation; on the contrary, it feels a lot like freezing. When cells reawaken, the first thing they sense isn’t their gradual slope toward normalcy, but the depth from which they’ve fallen. Katherine’s slow healing feels an awful lot like pain, and the bits of warmth she opens herself to may seem chilly on first impression. The advances of her philandering neighbor (Michael Shannon), the intrusive concern of her mother (Elizabeth Jeanne le Roux), the shared grief of her husband’s mysterious friend (an almost unrecognizably Eurotrash, bleached-and-gelled Luke Evans) — they look like a step in the right direction, but they open mental alleyways that leave her feeling even more alone.

Give it time. There’s warmth to be found in this, I promise. Though, honestly, even if there weren’t I’d love it all the same. Much of that has to do with ambiance: Danluck and DP Christopher Blauvelt paint the nightlife of Brussels with such vivid, striking texture, like some hybrid between Taxi Driver’s Manhattan and Lost In Translation’s Tokyo. Alternatingly romantic and seedy, inviting or overwhelming, depending on which door you choose to open. There are shots framed in windshields, through cigarette smoke or rain, that are just about as haunting as any I’ve seen all year. And the electronica soundtrack, with its sludgy, quaalude thumping, is perfect.

But the real revelatory pieces, here, are the lead performances: Katherine Waterston and Michael Shannon. Coming from two of the most consistently excellent actors working today, the quality’s hardly a surprise; but the degree to which they play against type really is. And for my money, it might just yield career-best performances for both. Waterston has always been wonderful, but her characters are often a bit enigmatic, more catalyst than anchor: Inherent Vice’s hazy Shasta, Queen of Earth’s haunting Virginia, even Fantastic Beasts’ Tina wriggles away from direct inspection. Here she is utterly, wonderfully raw — for much of the film the camera is trained on her face, seeing the world through her tiny reactions. Shannon, likewise, is unlike any role I’ve seen him in, trading his typical cerebral powers for something gentle, subdued, disarming. Like Katherine, he’s flawed and incapable of answers. But there’s a strength to him, here, a stirring thing I hadn’t seen before. Their small, wordless exchanges speak volumes. Are there any two people with more emotive eyes in Hollywood?

At one point in the film, the pair has a conversation about linguistics; about words that sound the way they feel. Currrvy. Anguish. Bur-den. State Like Sleep is a work of art that looks the way it means. Tender and disorienting in equal measure; viscous and blurry but moving nonetheless. It looks the way acceptance feels. Like something heavy beginning to thaw.

I loved this movie, and attending the premiere alongside Waterston, Shannon, Danluck and co. only made me want to champion it more — they approached the affair with such humility, you’d almost think they hadn’t made one of the best films of the year. But they have. I’ll be shocked if this doesn’t make my Top 10 list come January. Chris and I give a spoiler-free review of State Like Sleep in our latest Tribeca installment of The Spoiler Warning Podcast.