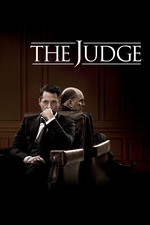 There’s a whole universe of films which were meant to be half-watched on a Sunday afternoon while folding laundry or skimming Facebook. Two hour runtimes stretched to 3+ with commercials, they don’t want to surprise you or make you think — they just want to hang out for a bit. They present characters you recognize immediately, put them in predictably heartfelt situations, and coast through the wistful drama/comedy/drama slopes with just enough momentum to keep the wheels turning. No one can spoil them for you: even if you don’t quite know the trajectory the characters will take, you know where they’ll be when the credits roll. Cutthroat businesswoman learns there’s more to life than winning. Big city lawyer embraces his Midwestern roots and makes out in his empty high school gym. Designer puts his fiascos behind him and dances to Free Bird. Matt Damon buys a zoo.

You know exactly where everyone in The Judge is headed, but that doesn’t keep it from being a pleasant ride. Everyone is recognizable: Robert Downey Jr. the charismatic fast-talker, Robert Duvall the dad who never said he was proud, Vera Farmiga the small-town girl who doesn’t need to travel the world to have it pegged. They’re well-acted and fun to watch, and even though you can see their moves a mile ahead, there’s something comfortable about being able to predict the future. From Bon Iver-backed country drives to father-son shouting matches in the rain, it hits all the obvious beats that you’ll feel or hate depending on your mood. It’s not especially good, and definitely not worth rushing to theatres for. But there are plenty of worse ways to spend a Sunday afternoon.