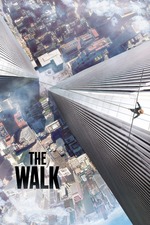 The story of Philippe Petit poses an unanswerable question: what human experience is worth dying for? Perched on a tightrope between the north and south towers of the World Trade Center, he's a Meru climber taken to absurd, logical heights: he doesn't want to fall, but the beauty of his act -- what makes passersby gape in awe rather than toss a begrudging quarter -- is the overwhelming threat of death. Risk isn't peripheral, it's the primary aesthetic: a man staring mortality in the face and dancing. For what? Fame? Ego? "Art?"

The Walk doesn't tell us much that Man on Wire hadn't already covered, philosophically. But what it shows us is pure cinematic magic. 104 stories above Manhattan, all of Robert Zemeckis' technophilic excesses become strengths: the exaggerated 3D disparity between wire and ground, the uncanny CG grace of Philippe's movements, blinding fog and roaring winds in heavy-handed IMAX glory. When Petit steps onto the wire, we feel the weight of his vertigo; and when he finally conquers it, we feel his bizarre catharsis. I can't explain it in words. All I know is there was something so calming, so optimistic about joining him up there. Maybe I'm just a sap.

Because why should it be optimistic, really? Philippe isn't a rational character, and to any of us his actions ought to seem desperate and reckless. The coup of the movie, due in large part to Joseph Gordon Levitt's charming performance, is that we cheer in spite of ourselves. Everything, from the terribly silly accents to Amélie-esque narrative flourishes, puts us in the headspace of this eccentric dreamer; an aesthete to whom ze towarrs (never les tours) beckon like sirens. I felt, in a small way, like I did watching Jodorowsky's Dune: intoxicated by giddy ambition. The goal doesn't need to make sense, it's the wanting you want.

The Walk isn't a remotely perfect movie, but those moments on the wire achieve something really special. Something rare in American blockbusters. Something tranquil, and celebratory, and -- in some inexplicable way which has almost nothing to do with 2001 -- profound. See it in theatres, on the biggest screen you can.

Chris and I exorcise all our terrible accents and The Wire references in week's episode of The Spoiler Warning.